FREE DELIVERY ON ALL UK ORDERS OVER £50

DELIVERIES ARE RUNNING AS USUAL

It took a while to get the hang of the controls but don't get frustrated you'll get there. This really made a difference from week one, found it easier to get up on those dark winter mornings and in ano improved mood and energy. I combined this with my light box on the office every day at my natural energy dip in the afternoon. The dark winter days have never seemed so short. Recommend anyone to give it a go.

sadly I could not work out the instructions. There are three buttons on two sides which have to be programmed to set the light, the choice of sound, the radio and light volume and intensity, the time, and I just could not do it so sadly sent it back. I managed to make the bird sound work, but it was ear splitting and I had to unplug the light to stop it as I couldn't find the off switch or volume control. The instruction book was encouragingly small so I thought that I was in with a chance, but I couldn't make head nor tail of it. So it has sadly gone back. No idea what quality to give it, and seems like good value if you can make it work - but performance I'm afraid I've given bottom score to as for me it didn't work at all.

Arrived promptly and is as described and shown in the pictures. It has all the features advertised but I found the interface quite difficult and it took me a long while to set up, I have now got it set up and it does do what it said e.g. Light fades on for 30 or 15 mins before alarm but I find the light is not bright enough for me and I don't like any of the sounds avaliable for the alarm they are all quite harsh. Overall for the price it is okay but I wish I had spent a bit more for something more user friendly.

This was slightly disappointing. The light comes on well, but the sounds are too loud even at the lowest level.

I find I wake up a lot easier, especially now in the dark mornings. The light itself is comfortable to wake up to. I recommend this product to anyone who has trouble waking up in the mornings.

I have been using for a month now. Principle of the light very good, wake up light set for 30 minutes before alarm works well for me. The alarm sounds are good and loud. Have been feeling much better in the mornings and combining it with a blue light for an hour or so during the day, my energy levels are up. Now the bad bit: Its very complicated to set alarm & time, I am having difficulty turning the alarm off if I don't want to use it. Not sure if it is just my particular unit or the design in general. The clock has gained 2 minutes in time over the last 5 days, and completely reset itself when the was a powercut despite having batteries to 'remember' the time. Overall the good outweighs the bad and the advantage it has had for me in the mornings leads me to think i will carry on with it despite my gripes.

I bought the wake up light for my daughter who finds it hard to wake up on a morning. Since using this lamp, she says she feels much more refreshed when she does wake up and loves how the light wakes her up.

The wake up light is definitely helping, if it wasn't I would have returned the lamp. Several issues The alarm sounds are unrealistic and irritating Can't tune the radio to any station fully so poor sound quality The light flashes when the alarm goes off which is an issue as I suffer from migraine The instructions are poorly translated and difficult to understand The alarm button doesn't always respond so have to try several times to change the time

This works very well. The birdsong is a little harsher than I expected but there are plenty of other sounds to choose instead. I am finding it very reliable.

Very disappointed. The light is orangey, which is more like evening light than morning light. It needs to be blue to help your body wake up. The settings aren’t easy, but the design is horrible. It reminds me of those old radio alarm clocks from the 80s/90s. The buttons are actually painful to use and the whole thing feels tacky. The noises are awful; computer generated and sound nothing at all like he real thing. Spend the extra money and get something that gives you a blue light if you’re wanting it to help you wake up. I’m struggling to get up even more than usual. I’m asking for my money back.

I found the light difficult to set up. The menu system is fiddly and iwas giving it to my 89yr old Great Aunt. I would not recommend it for an older person. To be fair, i have tried a more expensive one of a different make and that was just as difficult to program. The sounds to wake up to are very poor quality.

Brilliant, I like the sound selection and is much easier to fall to sleep. Waking up is easier too. Very pleased with the lamp.

Nice compact size not particularly elegant. The light is a warm light and very good for filling the room on a dark morning, not harsh light a not room light. The control are a bit clunky and are difficult to use, I don't find it that user friendly. Overall good but not great

I bought this for my husband for Christmas after carefully reading the reviews. They did say it was very complicated but I thought it couldn't be too bad and my husband is very practical. He gave up after three days and gave it to me. The natural sounds are very disappointing so I'm just using the light now but even though it says you can set the sunrise function without sound I can't seem to make this work so I just have the volume at 1 so you can't hear 'terrifying attack of the frogs' and use my phone alarm as well. It's working ok in this way but not ideal. Having said that, I do really like the sunrise function. I am waking gently to the light and it is a lot more pleasant than just an alarm. That's what I bought it for really so I can live with the rest, I thoroughly recommend the sunrise light function but think the sounds and controls need improvement.

I Love this light!! It wakes me up so naturally and the light is not too intense, it is a nice orange glow and has different brightness settings so I can use it to read too! In regards to making my SAD better, I have been using it nearly 2 weeks and I have to say I do feel better on a morning and it makes getting out of bed easier, I have also noticed a difference in my partner being able to get up easier too. I like that you can use the radio as an alarm, my only negative, if any, is that when you turn the alarm off the light goes off as well so I have to turn it back on. I would definitely recommend this product and I think it is very reasonably priced.

It is certainly worth the money, it really works. I do early morning and wasn’t sure if it would help me but it helps to wake you up feeling refreshed.

Love this lamp!!!! The wake up sounds are the best. I have the wind blowing option and it wakes me up gently with natural light.

I liked the light when it arrived. Despite what other reviewers said, I was able to work out how to adjust everything, using the instructions supplied. Like other reviewers, I found that the frogs sound was the most pleasing to wake up to - disappointing that an English dawn chorus was not one of the options. As the days were rapidly getting longer when I bought it, I didn't have many weeks to trial it before the actual dawn was happening earlier that my alarm, but I did like it, and I think it was helping me to feel better in the mornings. I got around the problem of the over-bright LED display by putting a black hairband round the whole clock at night. Stupid to have to do this, as the whole point of the thing is to let you wake up with a bright light, and sleep in the dark, but it wasn't much trouble. It is therefore a shame that a week ago, around 4 months after I bought it, my clock 'died' The display stopped working - despite having batteries for backup - when I tried unplugging it and plugging it in again, the display didn't work properly (some elements not lit up) and it was flashing. When I tried to adjust the time, it would not work. Finally, I took it apart, with some difficulty, and discovered nothing I could do to remedy the problem. I also found an answer to something I was wondering - there is not a lightbulb, just 2 tiny things, not much bigger than a pinhaead. 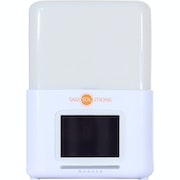